Steve remembers the first picture he drew – a jalopy at age seven. As he filled the blank sheet of paper with the bent fenders, torn convertible top and steam erupting from the radiator cap he began an artist’s journey that continues to this day.

Mostly self taught Steve looks for creative ways to express the drama and beauty he sees around him. He works in pen and ink, acrylics, charcoal, pencil and colored markers. His subjects include homes and buildings, portraits, equestrian art and pets, scenic views and caricatures. While working in advertising and industrial design he widened his expertise to include computer Steve studied art and design while a theater major at Rutgers University, the University of Miami and Catholic University. Many of his designs found expression as theatrical costumes and sets, which he also built. He has continued his art education at the Maine College of Art and the Heartwood College of Art. On trips, rather than using a camera, he prefers to capture the memories on a sketch pad 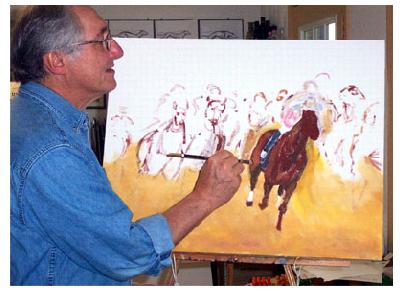 Important visual influences in Steve’s art embrace the freedom of the Impressionists, the dramatic fantasies of Boris Vallejo, the wholesome fun of Norman Rockwell, the romantic danger of Howard Pyle, the daring architecture of Frank Lloyd Wright, the fluid lines of Al Hirschfeld’s Broadway caricatures and the glamorous spectacle of the old MGM musicals.